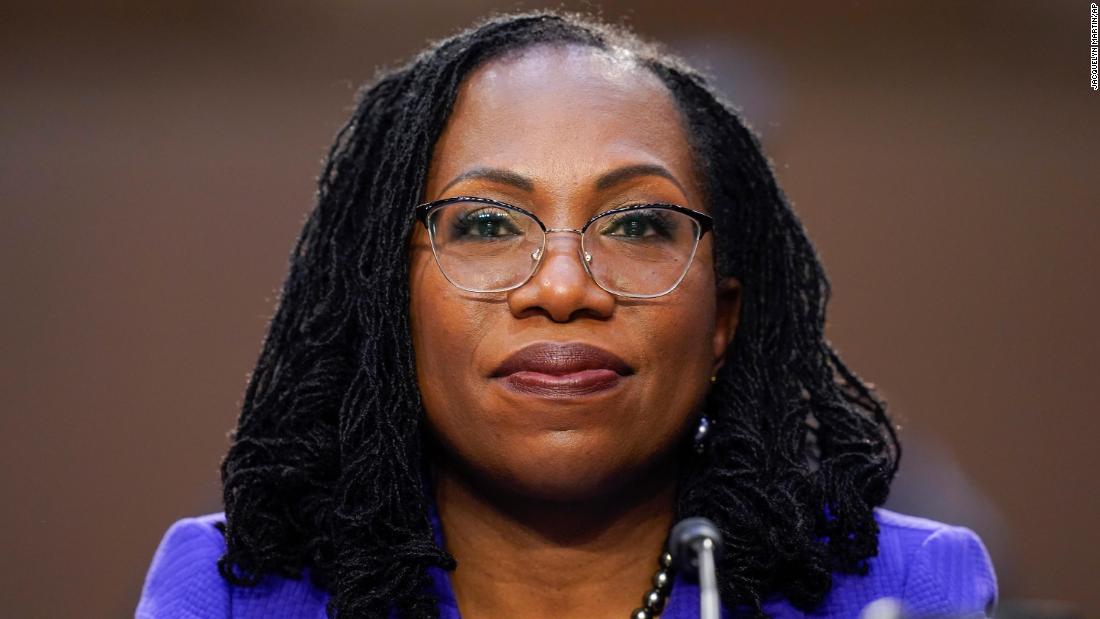 The tally was 53-47, with Republican Sens. Susan Collins of Maine, Mitt Romney of Utah and Lisa Murkowski of Alaska joining Democrats to vote in favor.

The confirmation represents a significant victory for Democrats, which they can tout as bipartisan, and a way for the President to deliver on a campaign promise at a time when the US faces a number of challenges at home and abroad, including soaring inflation and the crisis in Ukraine. Democrats broke out into loud applause and cheers when the vote was gaveled.

Vice President Kamala Harris, the first Black woman to serve as vice president, presided over the chamber during the historic vote in her capacity as president of the Senate.

Jackson will be sworn in after Justice Stephen Breyer retires sometime this summer.

Senate Democrats and the White House have continually highlighted the historic nature of the nomination.

Schumer went on to say, “In the 233-year history of the Supreme Court, never, never has a Black woman held the title of Justice. Ketanji Brown Jackson will be the first and I believe the first of more to come.”

Biden had said during his 2020 presidential campaign that he was committed to nominating a Black woman to the Supreme Court if elected.

At one point during her Senate confirmation hearings, Jackson became visibly emotional and could be seen wiping away tears as Democratic Sen. Cory Booker of New Jersey, who is one of only three Black senators, talked about her path to the nomination and the obstacles she has had to overcome.

“My parents grew up in a time in this country in which Black children and White children were not allowed to go to school together,” Jackson told Booker after the senator asked what values her parents had impressed upon her. “They taught me hard work. They taught me perseverance. They taught me that anything is possible in this great country.”

Scenes from the confirmation vote

The Senate chamber was packed for the vote, with most senators seated at their desks for the historic occasion.

The vote initially proceeded quickly as a result, but was later held open for some time when it became clear that GOP Sen. Rand Paul of Kentucky was the only senator who had not voted. The chamber waited for him to arrive and vote before it was gaveled closed.

While the chamber waited for Paul, lawmakers and people in the gallery grew restless. Several Democratic senators began chatting with a group of Congressional Black Caucus members who had come over from the House to watch the vote.

GOP Sens. Lindsey Graham of South Carolina and Jim Inhofe of Oklahoma voted from the GOP cloakroom because they weren’t wearing ties as is required by Senate rules on the floor. Graham was in a quarter zip and a blazer. He stuck his thumb down and receded into the cloakroom to cast a no vote.

The nomination cleared a key hurdle earlier Thursday when the Senate took a procedural vote to limit debate and break a filibuster, setting up the final confirmation vote.

Throughout the Senate vetting process, Senate Democrats have praised Jackson as an exceptionally qualified, trail-blazing nominee whose depth and breadth of experience, including as a federal public defender, would add a valuable and unique perspective to the bench.

Jackson was also a commissioner on the US Sentencing Commission and served on the federal district court in DC, as an appointee of former President Barack Obama, before Biden elevated her to the DC Circuit last year.

Confirmation hearings featured sharp and critical questioning from Republicans as many attempted to portray Jackson as weak on crime and, in a highly-charged line of attack, too lenient in sentencing child pornography cases. Jackson and Democrats forcefully pushed back on the accusations.

Jackson stressed her concern for public safety and the rule of law, as a judge and an American. And she argued that she approaches her work in an impartial way and that personal opinions do not play a role.

Republicans called for civility and respect during the confirmation hearings, arguing that Democrats did not extend that to Brett Kavanaugh during his vetting process before the Senate. Kavanaugh faced a sexual assault allegation, which he vehemently denied.

Democrats, however, argued that Republicans crossed a line by distorting Jackson’s record, particularly with respect to sentencing in child pornography-related cases.

A CNN review of the material in question shows that Jackson mostly followed common judicial sentencing practices in these kinds of cases.

In announcing that they would support the nomination, Murkowski and Collins both expressed concern over what they described as the politicization of the Supreme Court confirmation process.

Murkowski said that she rejects “the corrosive politicization of the review process for Supreme Court nominees, which, on both sides of the aisle, is growing worse and more detached from reality by the year” in her statement.

Collins said in her statement, “No matter where you fall on the ideological spectrum, anyone who has watched several of the last Supreme Court confirmation hearings would reach the conclusion that the process is broken.”

“It used to be common for Senators to give the President, regardless of political party, considerable deference in the choice of a nominee,” Collins said.

The Maine Republican said that approach “instilled confidence in the independence and the integrity of the judiciary and helped keep the Court above the political fray,” adding, “this is the approach that I plan to continue to use for Supreme Court nominations because it runs counter to the disturbing trend of politicizing the judicial nomination process.”

This story and headline have been updated with additional developments Thursday.

Share
Facebook
Twitter
Pinterest
WhatsApp
Previous articleTata IPL 2022 RR vs RCB highlights: RCB win by 4 wickets
Next articleThe shadow planet Ketu will transit in April for these 3 zodiac signs there will be strong yoga for promotion in the job

“Make One For Pralhad Ji”: PM Shares A Joke On Stitching Kurta In Mysuru