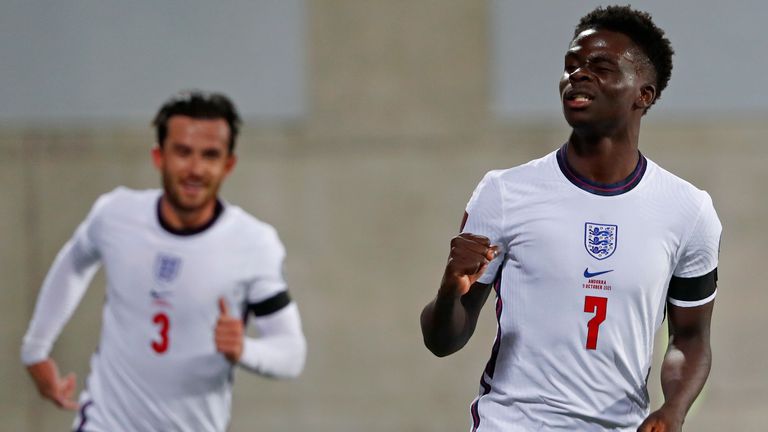 Gareth Southgate celebrated five years as England boss with a comfortable 5-0 win away in Andorra, which keeps his side top of World Cup Qualifying Group I and moves them closer to sealing their spot at Qatar 2022.

Ben Chilwell’s first goal for his country got England up and running when VAR overruled an offside call (18), before Bukayo Saka (40) benefitted from an exquisite pass from the standout Phil Foden to double the advantage before the break.

Tammy Abraham then marked his first England appearance in 11 months with a close-range finish (59) from Jadon Sancho’s second assist of the night, before James Ward-Prose followed up his saved penalty (79) – which had been awarded by history- making female referee Kateryna Monzul – to match the scoreline from September’s reverse fixture at Wembley.

Jack Grealish – who had won the penalty – then made it five when he followed Chilwell in scoring his first international goal (86), latching onto a long-range pass from goalkeeper Sam Johnstone, as England swept aside opponents ranked 156th in the world rankings .

The victory – celebrated by around 1,000 England supporters inside the Estadi Nacional d’Andorra, who were able to support their side away from home for the first time in almost two years – leaves England on the brink of World Cup qualification with just three games left to play, including Tuesday’s game with Hungary at Wembley.

There had been some concerns about whether this fixture would go ahead following a pitch-side fire on the day before the game but when referee Monzul blew the whistle at kick-off – a historic moment with her all-female team of officials in charge of a senior men’s England game for the first time – the visitors were immediately onto the front foot, with a series of Ward-Prowse set-pieces sent into the Andorra penalty area.

James Ward-Prose and Jesse Lingard – who were both left out of the Euro 2020 squad – joined Bukayo Saka in midfield, while Jadon Sancho and Phil Foden flanked Tammy Abraham.

Abraham should have turned in a Sancho cross and Chilwell headed wastefully wide inside the first 15 minutes, but moments later the left-back – who has been out of the first-team frame and was a replacement call-up to this squad – blasted in After Sancho’s lay-off from a Foden pass, with a long check from VAR Stephanie Frappart overturning an offside call against the Manchester United man.

Sancho had two markers on him throughout but rolled out his repertoire of tricks and crossed for Abraham to head on target, before John Stones sent an aerial effort of his own out for a goal-kick.

England eventually got the second goal, their first-half dominance deserved five minutes before the break when a fantastic Foden lofted through-ball allowed Saka to run through and, after a smart first touch, fire in a firm finish.

Sancho and Chilwell worked Andorra goalkeeper Josep Gomes shortly after the restart, with England’s left flank again proving profitable, and it was Sancho who set up another just before the hour mark, crossing for Abraham to prod in unmarked from six yards out.

Andorra’s Marc Rebes had previously been booked for whacking his hand into Chilwell’s stomach and the focus turned to referee Monzul when she opted not to show the midfielder a second yellow when he caught Conor Coady with an elbow on 67 minutes.

But even with 11 men on the pitch, a tiring Andorra were struggling to contain England and Txus Rubio’s trip on sub Grealish allowed Ward-Prowse to convert at the second attempt after Gomes had guessed the right way with his spot-kick.

There was still time for England to make it five, with Grealish dribbling at Andorra’s defense before shooting low into the corner, and that rounded off Southgate’s 42nd victory from his 65 games in charge – a win which makes the Three Lions’ qualification now almost a formality.

England continue their World Cup Qualifying campaign with the visit of Hungary to Wembley on Tuesday; kick-off 7.45pm. Andorra travel to San Marino on the same evening seeking to complete a double over the group’s bottom nation.