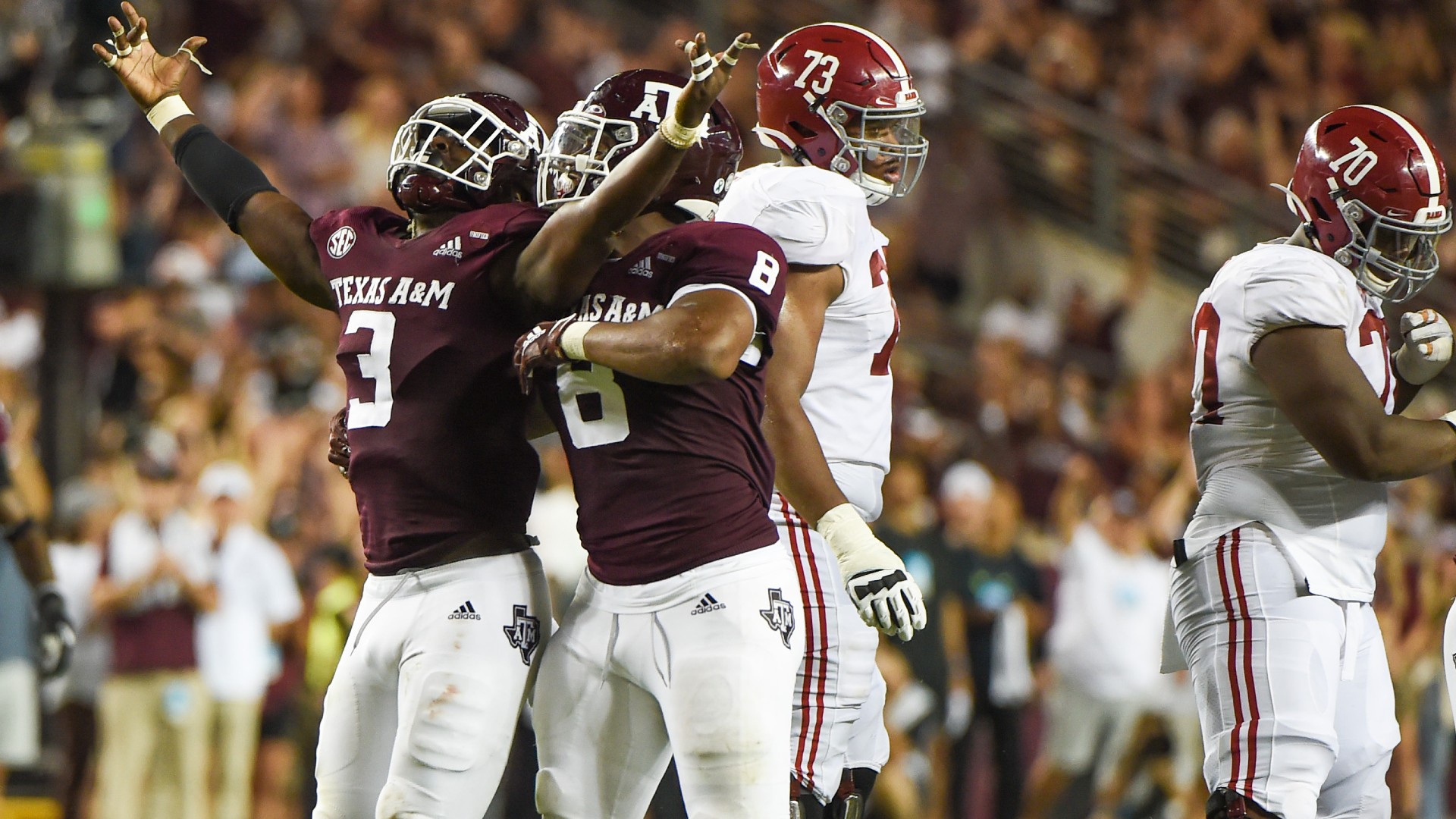 With Texas A&M’s shocking upset of No. 1 Alabama on Saturday night, the College Football Playoff field has a Tide-sized hole in it, for now.

And Oklahoma and Iowa sold their College Football Playoff status in two very different ways in a wild Week 6.

We’re not counting out Alabama yet, of course, but if the field were filled this week, the Crimson Tide would be on the outside looking in. A narrow win over Florida, a narrow loss to Texas A&M and Alabama loses the benefit of the doubt with undefeated teams for now.

The Sooners won a 55-48 thriller in the Red River Showdown against Texas. Caleb Williams replaced Spencer Rattler and led Oklahoma back from a three-TD deficit, and Oklahoma maintained its spot in our College Football Playoff projections.

Iowa beat Penn State 23-20 for its third victory against a ranked team this season. The Nittany Lions took care of the non-conference and cross-over tests and now face a Big Ten East grind against Ohio State, Michigan and Michigan State. All four teams are in our top 10.

The first set of CFP rankings will be released Tuesday, Nov. 2. Each week, Sporting News will break down the playoff picture:

Four in the College Football Playoff

The Bulldogs gave up just their second offensive touchdown of the season, but that was after they had built a 24-3 lead at Auburn. Georgia won 34-10 and continued its march through the first half of the season. Stetson Bennett filled in for JT Daniels again at quarterback. Bennett finished with 231 passing yards and two TDs, and Zamir White added 79 yards and a pair of TDs. Georgia is the team to beat in the SEC East, and matchups with Kentucky and Florida close out the October schedule.

Caleb Williams altered the course of the Red River Showdown, and perhaps Oklahoma’s season, in a 54-48 thriller against Texas. Williams replaced Spencer Rattler, the preseason Heisman favorite, and brought the Sooners back from a three-TD deficit in breath-taking fashion. The Sooners have won five one-score games this season, but Williams added another dimension to the offense. That opened up big-game performances for Kennedy Brooks (217 yards, 2 TDs) and Marvin Mims Jr. (136 yards, two TDs). Lincoln Riley has a quarterback controversy now, and the Sooners cannot look past TCU.

The Hawkeyes beat Penn State 23-20 with 13 unanswered points in the second half. Iowa now has three wins against ranked opponents on its resume, and the defense produced four more interceptions. Spencer Petras passed for 195 yards and a pair of TDs, and the remainder of Iowa’s schedule is the six teams in the Big Ten West. This could be a dream season for longtime coach Kirk Ferentz.

The Bearcats did exactly what they will need to do through American Athletic Conference play. Cincinnati Hammered Temple 52-3 on Friday. Desmond Ridder passed for 259 yards and two TDs, and Jerome Ford added 149 yards and a pair of TDs on the ground. As long as that tandem continues to dominate, then the Bearcats will be in the mix. For now, it’s as the first team out. UCF is up next. Cincinnati has won the last two meetings by three points apiece.

Alabama lost, so now the season officially begins. Texas A&M beat Alabama 41-38 with a last-second field goal; which capped a game the Aggies controlled most of the way. The Crimson Tide trailed 24-10 at halftime and the defense gave up 10 points on the last two drives. Texas A&M still trails Alabama in the SEC West, and Alabama still has the best path to Atlanta. The pressure comes with winning out, including the SEC Championship Game, and the big question will be how a Nick Saban-coached team lost with 522 total yards.

The bar-stool arguments are going to get real in Ohio. Cincinnati might be the higher-ranked team, but the Buckeyes have the inside track on the CFP with what’s to come on the Big Ten schedule. The Buckeyes have averaged 54.5 points per game since the loss to Oregon. CJ Stroud threw five more TDs in a 66-17 blowout against Maryland. TreVeyon Henderson, Chris Olave and Garrett Wilson scored two TDs each. When it’s rolling, Ohio State has the best offense in the FBS. Ryan Day still has yet to lose a Big Ten game, and there is a bye week to get ready for Indiana on Oct. 23. Despite the loss to Oregon, the Buckeyes are in great position for another playoff run.

The Wolverines escaped Nebraska with a 32-29 victory for their second road victory in as many weeks. It wasn’t perfect by any means. The Huskers scored 22 third-quarter points, and Michigan trailed for the first time this season. Hassan Haskins and Blake Corum combined for 212 rushing yards and three TDs, but the question on reps between Cade McNamara and JJ McCarthy could become more prominent in the second half of the season. All that said, the heat is off sixth-year coach Jim Harbaugh, and Big Ten East tests against Michigan State, Penn State and Ohio State await.

Second-year coach Mel Tucker has choreographed the most-surprising undefeated start to the season. That continued in a 31-13 victory against Rutgers. Kenneth Walker added 233 rushing yards and a 94-yard TD to a running total that includes 913 yards and nine TDs through six games. Jalen Nayler had five catches for 221 yards and three TDs. Peyton Thorne continues to control the offense. Michigan State’s defense isn’t perfect and there are too many penalties, but a victory at Indiana next week means the Spartans will be unbeaten when Michigan visits East Lansing on Oct. 30. There is no motivation required at that point.

The Ducks had a bye week to absorb last week’s upset loss to Stanford, and news that running back CJ Verdell would miss the rest of the season is another blow for their Pac-12 championship hopes. Mario Cristobal has had to deal with too many injuries, and that’s going to be tough to maintain this spot in a win-out situation. Oregon returns Friday against Cal, and there is not a ranked team left on the schedule. The Ducks did beat Ohio State, but they need to turn it up in the second half of the season.

Can we get two unbeaten teams in Bedlam on Nov. 27? Would they run it back the next week in the Big 12 championship game? The Cowboys have a bye week to get ready for Texas. Oklahoma State likely will bump into the top-10 as a result, though Coastal Carolina could be in this spot. Jaylen Warren and Tay Martin are outstanding pieces around quarterback Spencer Sanders, who is healthy now. Oklahoma State must protect the football better, but they are in business.