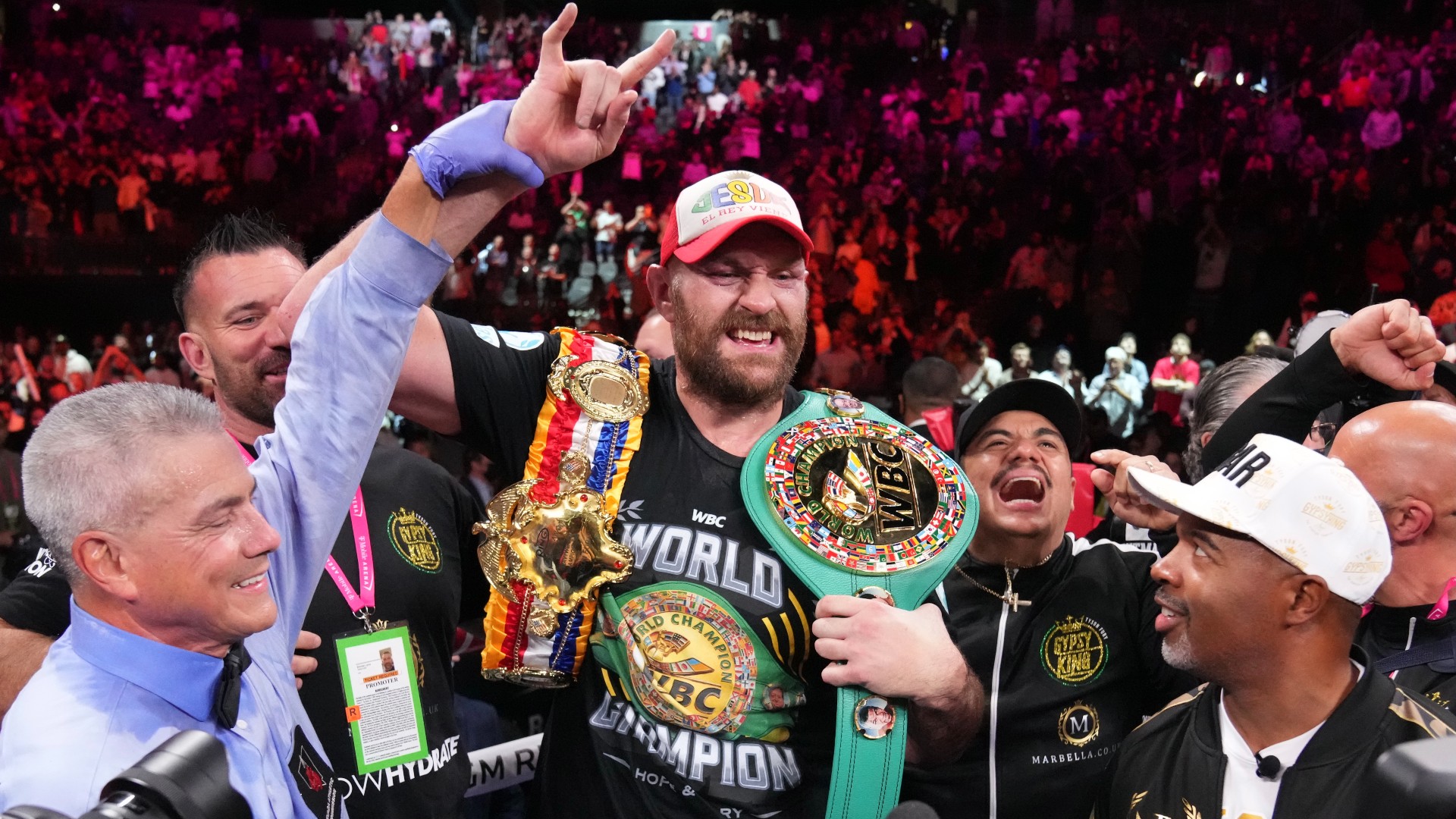 And that goes for today or anyone in the history of boxing.

It’s a lofty claim and could be the product of a high that hasn’t quite come down, but after Fury polished off one of the greatest trilogies in boxing by stopping the resilient Deontay Wilder in the 11th round of their epic heavyweight rubber match, it might be time to discuss where Fury ranks among the greats.

Fury himself is careful when discussing his name alongside the likes of Muhammad Ali, Joe Louis, Rocky Marciano, Joe Frazier, Larry Holmes and Lennox Lewis. But his bravado peeked out just a bit after the fight when he addressed the media.

“I’m the big dog in the division. I’m probably one of the heaviest heavyweight champions in history tonight: 277 pounds,” he said. “I believe that I can beat anyone in history; any man born, I believe, I have a really good chance of beating him. … You just gotta knock me spark out, and if you can’t do that, you can ‘t win.”

We’ll talk about Fury’s resume and remarkable skillset in a moment. That last statement is what separates him from many of the great heavyweights.

Most heavyweights are phenomenal when things are going their way. But when the pressure comes from the other side, they aren’t nearly as resilient. Once someone figured out they could bully the bully in Mike Tyson, he wasn’t the same. And most suggest that Tyson, along with Sonny Liston, Earnie Shavers and George Foreman are among the biggest bullies and punchers in boxing history.

It’s safe to add Deontay Wilder to that list.

It’s been an unwritten rule that you don’t get back up when Wilder hits you. He’s proven it by knocking out every human being that he’s stepped into the ring with. Except for Fury. And they’ve fought three times. And Wilder has put Fury down four times. Nobody else would have gotten up.

But Tyson Fury is wired differently.

Once again, Fury looked like a dead man against Wilder, much like he did in the final round of their first meeting. This time, it came in the fourth round in a fight it looked like he was going to run away with. But Wilder’s incomprehensible power showed up and blistered Fury with a right hand that sent the champion down to the mat. Fury, as is almost expected by now, got up. What wasn’t expected is the way Wilder put him down again with a combination that left The Gypsy King on all fours in his own corner.

The 15,820 fans at T-Mobile Arena were buzzing as they were in the midst of an all-time great heavyweight fight that was made even greater by Fury’s ability to peel himself off of the canvas again and get out of the round. He would absorb Wilder’s thunderous power a few more times in the fight but took control and throttled an otherworldly resilient fighter and finished the job with a right hand that caused The Bronze Bomber to face plant into the canvas in the 11th round.

“He caught me twice in the fourth round, but I was never thinking, ‘Oh, this is over,'” Fury said. “He shook me, put me down, but that’s boxing, and that’s life as well. It’s not how many times you get knocked down. You’ve got to keep fighting and keep moving forward.”

Moving forward. Fury is great at that. But he’s also phenomenal moving backward and laterally. He does all of this while standing an incomprehensible 6-feet-9-inches and weighing north of 275 pounds. No heavyweight should move as Fury does. That’s usually a task left for the smaller weight classes. But Fury is a beautiful boxer who can box is brilliantly off of his back foot — as evidenced when he first became world champion by beating the then-indestructible Wladimir Klitschko — as he can moving forward and moving down his opposition with his size and strength.

He’s a chameleon of sorts, a giant who can adapt to any situation. And he’s demonstrated that throughout his career. He’s phenomenal defensively and often utilizes upper body movement to avoid damage. His footwork is pristine and he can dance out of trouble if cornered. But when forced to bite down on his gumshield and fight his way out of a situation, he can do that as well.

Few fighters in heavyweight history have more methods to win than Fury. The only thing that can be held against him now is the level of competition.

To be clear, Fury has defeated arguably the hardest puncher in boxing history twice and spent 30 rounds in the ring with him. He’s also beaten the man who ruled the division for over a decade in Wlad Klitschko. But, for some, that’s not enough. Ali had Foreman, Frazier, Norton, Patterson and Liston. That’s just ridiculous. Perhaps untouchable.

Fury is only 33 and still has the opportunity to become the undisputed heavyweight champion before his career is all said and done. He’s not finished yet, but what he’s already accomplished is noteworthy.

If Fury isn’t at the top of the greatest heavyweights list, he has, at the very least, put his giant foot in the door and is worthy of the conversation.