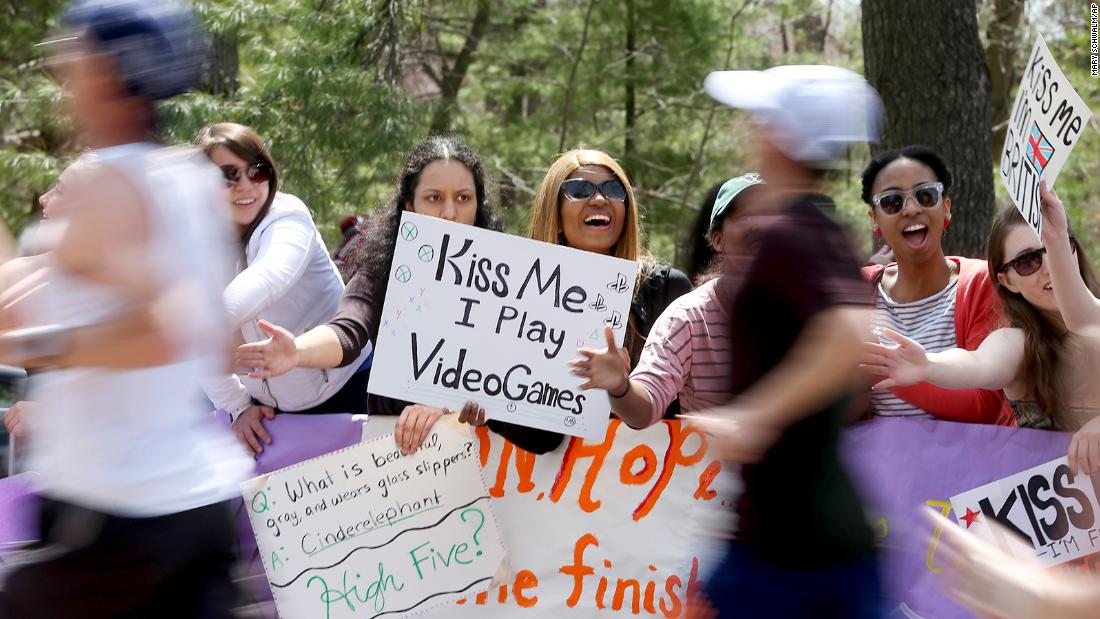 But race organizers ask that we please have none of that during Monday’s event.

The Boston Marathon is set to go Monday morning for the first time since April 2019, after Covid-19 prevented the 2020 race and postponed the 2021 edition until now.

Organizers made some policy changes or recommendations to prevent virus spread — and that includes discouraging an affectionate tradition.

The signs will be there again this year — but without the smooch offers, marathon organizers hope.
“The (Boston Athletic Association) strongly encourages everyone to … (practice) personal responsibility” for Monday’s race, which “may include … refraining from kissing a stranger around the halfway mark,” organizers wrote.

“The hype is really there. … I think there’s going to be a big turnout, even though we’re going to be wearing masks” and not kissing the competitors, Ashford told CNN on Sunday morning.

Students from across campus generally make a variety of signs — including the “kiss me” signs in the past. One residence — Munger Hall — also makes signs based on outside requests from runners or runners’ friends and families.

Ashford, the Munger Hall house president, says students’ anticipation is heightened by the postponements, as seniors are generally the only ones who’ve had the chance to participate previously.

She suspects the anti-kissing guidance will be generally well received because of the pandemic.

“Everyone knows that wouldn’t be Covid-safe, and wouldn’t leave here with the feeling that (kissing) was the right public health choice,” Ashford said.

Kissing isnt the only thing discouraged. Organizers don’t want the general public to feed or water the racers, either.

They want runners to use only “BAA-provided course nutrition in lieu of accepting hydration or food from spectators.”

Marathon requires runners to be vaccinated or test negative

Marathon organizers have laid out other special requests or requirements for runners this year.

Days before the race, runners were required to either show proof of vaccination or get a negative Covid-19 test result over the weekend.

Participants also must wear masks on buses transporting them from Boston to the starting area in Hopkinton, and everyone must wear them at the indoor Boston Marathon Expo.

Organizers also reduced the number of participants to roughly 20,000, hoping to make the start and finish areas not as crowded as usual. more than 9,200 applicants who normally would have qualified were turned down.

The marathon is expected to return to its traditional April slot next year, and registration for that race will happen next month.

us,Boston Marathon kindly asks you to not kiss the runners Monday – CNN