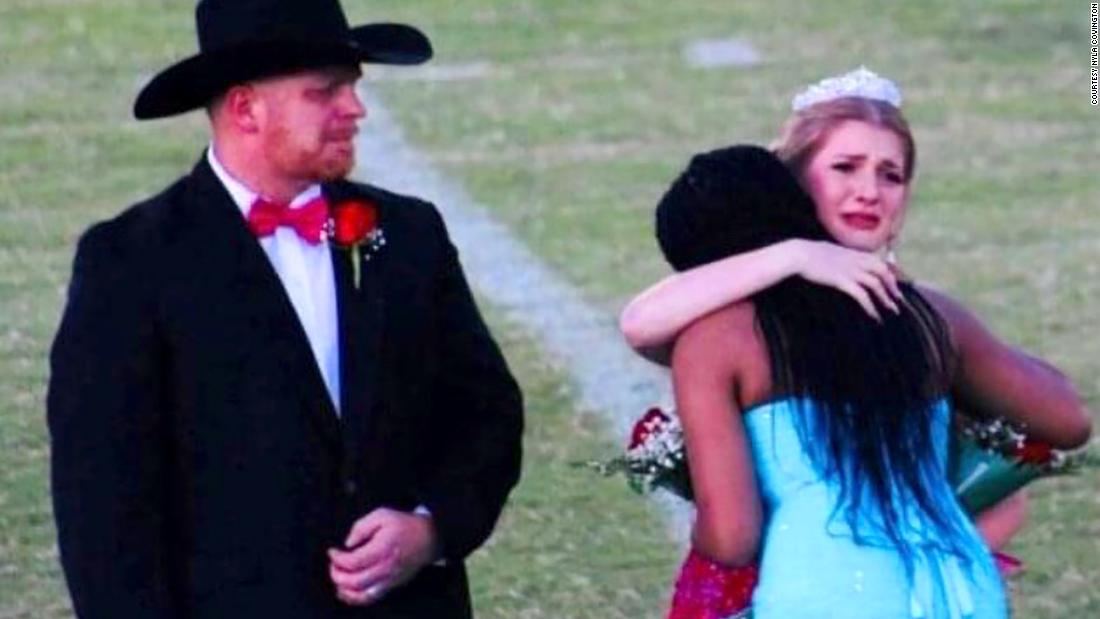 Her mom, A.J. Walters, an administrator at Mississippi’s Forrest County Agricultural High School, never missed anything when she was growing up — from awards assemblies to games she was cheering at. Her mother didn’t want her to miss her big moment, Walters said.

Walters, who aspires to become a nurse, didn’t win homecoming queen that night, but thanks to an act of kindness that has shined a healing light on a grieving family and community, she ended the night in a crown.

Senior Nyla Covington was voted homecoming queen by fellow students at a school football game in late September. But moments after being crowned, felt called to crown someone else.

After asking permission from school officials to do so, Covington walked over to Walters, standing beside her cowboy hat-clad father, and put the crown on her.

“I just felt like it was something that was put on my heart,” Covington told CNN. “It was really just for her, to bring up her day a little bit, and she’d rather have her mom than a crown… but the point was, I was telling her that she was her mom’s queen and I was just letting her know that she was loved by many and especially me.”

Walters said she was thinking of her mom, the “school mom” to so many who were both standing beside them and staring back at them from the stands, when Covington’s gesture caught her by surprise.

There were tears on and off the field.

Forrest County AHS School’s principal Will Wheat tells CNN he is proud of the young women.

“That wasn’t preplanned, this was all on the kids, that’s the beautiful thing about it,” Wheat said. “We are elated and we are so thrilled over their actions and how it represents the school.”

The two teens were friendly before homecoming, volunteering together at different school functions, but say they have grown closer since the event.

Walters has the crown, which Covington would like her to keep, she said, as a reminder of the moment.

“It’s just something materialistic, but we put meaning to it so that’s why I want her to keep it,” she said.

Sean Walters, Brittany’s father, says their family is dealing with their grief “day by day.”

“Just knowing that there’s people out there that care about this story and knowing that, not directly, but maybe indirectly, maybe my life is helping reach a lot of people, and just part of this story is continuing [A.J.], I guess the way that she lived her life,” he said.

He thanked Nyla’s parents at homecoming, calling them “wonderful people.”

“They have done a wonderful job raising their kids. That’s what I told them. I said ‘it shows how much and how great a job you’ve done right here. Just the simplest act that she did,” he said.

This past Saturday, the Walters’ held A.J.’s funeral. Her wake was held the same night as a school football game.

Most of the school showed up.

Homecoming night was hard in so many ways for Brittany Walters. Her mother had touched the hearts of so many at the school and seeing their grief on their faces was hard to handle amidst her own.

But how the night unfolded — from a heartfelt act she’ll never forget to the support they felt all night — was in keeping with her mother’s spirit.

“I kind of feel like this is her way of continuing to help people because people seeing Nyla doing that will want to make them do something nice,” she said. “That’s exactly what she’d want to happen.”

us,The homecoming queen gave away her crown to comfort a grieving family and set an example for us all – CNN